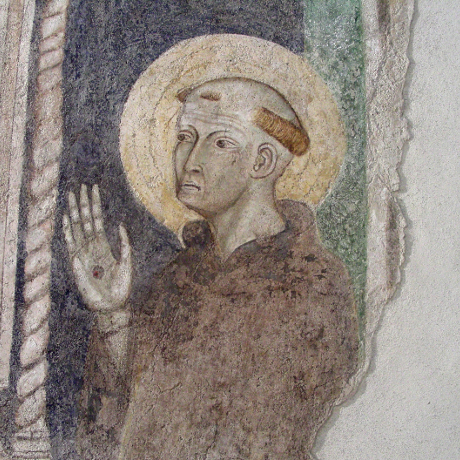 All the saints are really «social,» that is, they have served their neighbours in Christ or Christ in their neighbours. The term, “sanctity,” is not given without this love, transposed into works. Even the monk lost in a mountain cave and who prays for the Church,  serves his brothers because his prayers and renunciations are transformed into graces for them.
In effect, some saints even gave their aid directly to society in times of greater suffering. In line with the example of Christ, there have been workers who served society well, especially in schools, public squares and missions, with assistance, education, hospital ministry and all the charitable resources. But the Christian social sentiment particularly considers St. Francis as its patron and prototype. In the full raging of war, St. Francis of Assisi is celebrated as the replica of the King of Peace: when the day becomes darker, we turn to those who taught true happiness; this means that beyond the frenetic moment, one envisions the divine reasons of human coexistence and seeks it. The Pope proclaimed Francis of Assisi, and with him, Catherine of Siena, as the two patron saints of Italy, worthy of the country, and having the best features of its civilisation, and universal and specific values. They were two giants who by themselves, suffice to give pride and character to Italy, and wherever one learns the fundaments of Christian history. Two geniuses in short, for them their land was not distant or estranged from any other people. After the personages of the New Testament,  Christianity has not produced more perfect examples of Christ: the first was called a «second Christ» and the second, “a mirror of Mary.”
St. Francis is one of those Saints that few disagree about. Titans, like Paul, Augustine, and Ignatius arouse different opinions. Francis is practically universally loved: his sanctity is liked by all. Even among the non-Catholics and non-Christians, he is considered the model of saints. This veneration is not only folklore or regret, but also a conservation instinct that leads us back to the sources of eternal wisdom or even true happiness.
When the world does not progress often because of social upheavals, many are heard to sigh: «We need a second St. Francis.»

Upon wedding Madame Poverty, Francis put his soul in the first place, where others would place material goods, God, and  their money chest.
This is where the devolution lies, which was a repetition of the revolution of Christ. The moment the soul is freed from the adoration of wealth, it is no longer driven to exploit the neighbor, and desires nothing that is not his: in charity, also wealth which is purified, moves along, no longer hindered by the barriers of egoism. The more the Poor Man of Assisi freed his heart from the cupidity of earthly things, the more he became a passage for divine love. But Francis reached a heroic conformation to the Master because he had extraordinary strength of mind and an indomitable will; what is hardly seen when one focuses more on his speeches to the birds, and also on his lessons to the wolves, are things that were on the other hand, a consequence of the reversal that came about in his soul. The truth is that, aided by grace, he had the courage to go against the current and raise his army like a dike. He opposed the order of traffickers with an order of beggars.

Having been responsible for this overturning of the majority’s conduct, even today he can teach us that the economic problem, exceeding its term and becoming absorbing for too many,  imprisons the heart, intelligence, culture and art, morals, and all sectors of life itself. The ideas of profit, wages and production suck in like a gorge, the healthy and profane things, the wakes and dreams, and the present and the future. We are the most prostrated to the ground, in the cult of the goddess, Economy, in the polytheist temple of Mammon. We are branded with the mark of wealth, and life has become a misery.
The example of Francis is actual in that its always induces us to see life not from the viewpoint of economy, but from the leap into God’s love, which gives like the sun, a bright aspect to things, making the human experience a preparation to paradise, peeling away its anxieties and terrors, and recreating mankind, from wolves to brothers.
This is what the Franciscan spirit revives in the Christian spirit, along with the genuine, creative, sunny Italian spirit.